Dialogue between Catholics and Muslims in Bosnia and Herzegovina

Center for Advanced Studies is privileged to present you the book by Msgr. Mate Zovkić Dialogue between Catholics and Muslims in Bosnia and Herzegovina.

This book contains author’s essays and presentations held at different interreligious encounters in Bosnia, Turkey, USA, UK, Germany and Austria from 1998 to 2018. Twenty three items were published or presented in English and five in German. Following the guidelines of Vatican II and of the recent Catholic teaching magisterium, he presents Muslims of Bosnia and Herzegovina to a Christian audience depicting them as Europeans who accepted Islam during the Ottoman period in Bosnia (1463-1878) and are ready to share their country, common values and needs with citizens of other ethnic and faith affiliations. The author asserts that Bosniak Muslim theologians, imams and religion teachers, headed by their Rais al-Ulama Dr. Husein Kavazović, strive to educate their believers in their own faith and assist them in building up a tolerant civil society.

In the first chapter, the author's presentation of Childhood and the ministry of Jesus in the Qur'an and the Synoptic Gospels, that was held at the Catholic Biblical Symposium in Budapest in 2008. The second includes a lecture How can Christians and Muslims reasonably defend their own faith without mocking each other? held in Ljubljana on November 25th, 2017, within a scientific conference on the occasion of the 100th anniversary of the first mosque in Slovenia, which was built by the Austrian authorities in the First world war for Bosnian Muslim soldiers. 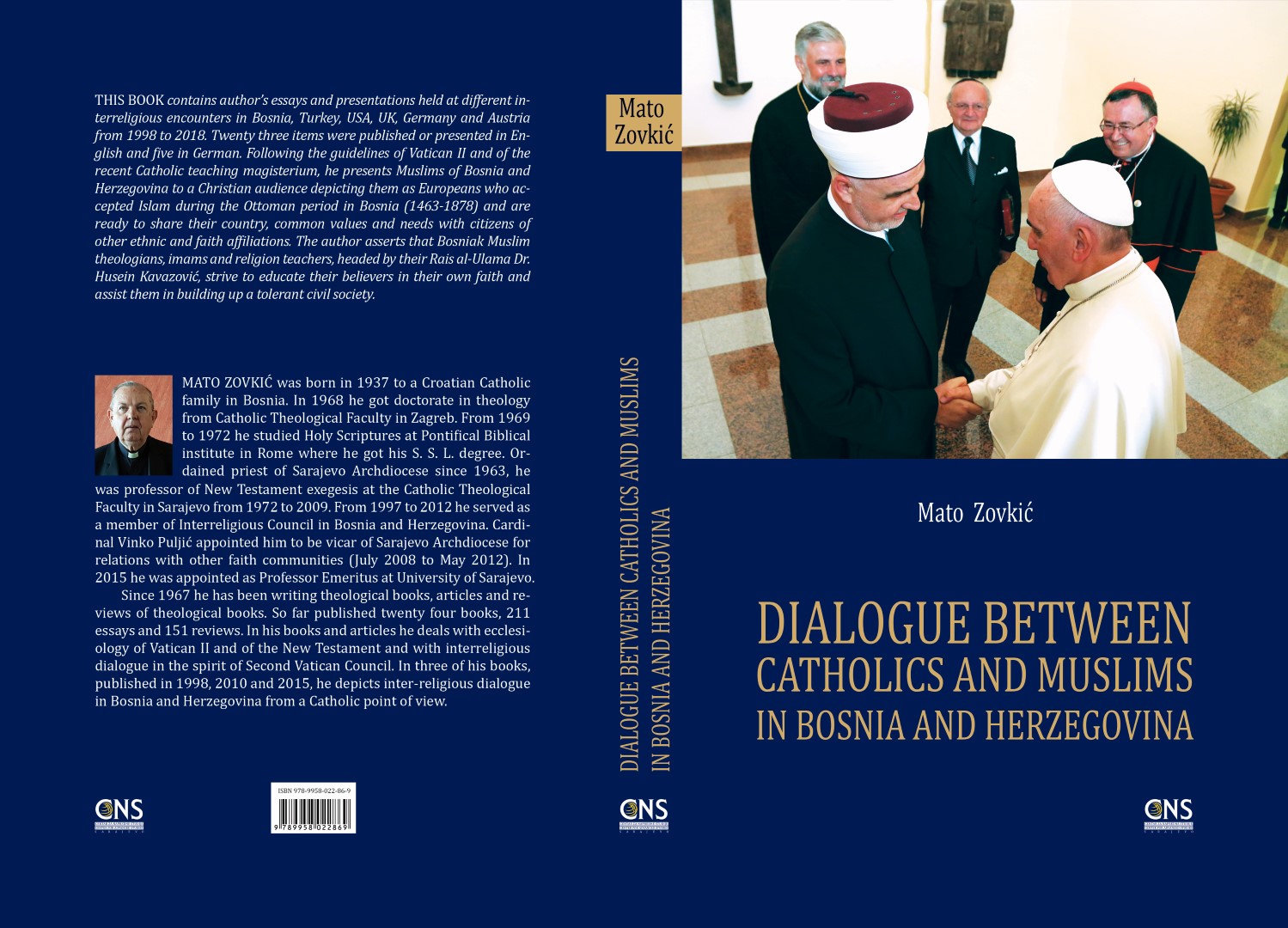 One of the topics is Meeting between Christianity and Islam in BiH in a missionary perspective prepared for the Book of Baptist Theologians Mission in Central and Eastern Europe – Reality, Perspectives, Tendencies (English original published in London in 2016.). Msgr. Zovkić, in June 2011., was a delegate of BK BiH at a working meeting of Catholic theologians on Christian Islamophobia in Europe and his brief presentation titled: Islamophobia in the political context of Bosnia and Herzegovina. It is included in this book (p. 217-222). His presentation on the study day of the European Society for Catholic Theology in February 2008. was also included, State of Church and theology in BiH (p.223-232) because a response was touched of the Muslim theologians in Bosnia to the Catholic dialogue initiative.

Among the five works in German, one was made at the request of Petrus B'steh, editor of the Viennese Religionen Unterwegs, in 2015, that Msgr. Zovkić presents the situation among Bosnian Muslims after the election of Rais Kavazović on September 23rd 2012. and the establishment of new muftis on April 26th, 2014. This review work is entitled: Muslims in BiH between internal dialogue and peace-making relations towards those who believe different.

MATO ZOVKIĆ was born in 1937 to a Croatian Catholic family in Bosnia. In 1968 he got doctorate in theology from Catholic Theological Faculty in Zagreb. From 1969 to 1972 he studied Holy Scriptures at Pontifical Biblical institute in Rome where he got his S. S. L. degree. Ordained priest of Sarajevo Archdiocese since 1963, he was professor of New Testament exegesis at the Catholic Theological Faculty in Sarajevo from 1972 to 2009. From 1997 to 2012 he served as a member of Interreligious Council in Bosnia and Herzegovina. Cardinal Vinko Puljić appointed him to be vicar of Sarajevo Archdiocese for relations with other faith communities (July 2008 to May 2012). In 2015 he was appointed as Professor Emeritus at University of Sarajevo. Since 1967 he has been writing theological books, articles and reviews of theological books. So far published twenty four books, 211 essays and 151 reviews. In his books and articles he deals with ecclesiology of Vatican II and of the New Testament and with interreligious dialogue in the spirit of Second Vatican Council. In three of his books, published in 1998, 2010 and 2015, he depicts inter-religious dialogue in Bosnia and Herzegovina from a Catholic point of view.